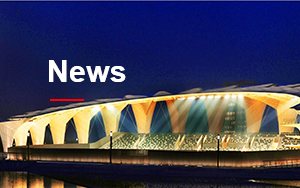 This year, the main bridge of changping road bridge in suzhou river was completed at the end of this year.

The picture says: the transverse aluminum board member of changping road bridge can be used as a small platform for pedestrians to rest.
According to gong liang, deputy manager of the project, changping road bridge spans 59.86 meters, no piers in the river, and Bridges across the river. The "eye of su river" stands out from multiple designs. The arch axis of the upper arch is matched with a long-span cantilever. It looks like an eye from the side and looks at the scenery on both sides of suzhou river. On the pavement which is higher than the roadway surface, the transverse aluminum plate is not only a decorative function, but also a small platform for pedestrians to rest.
In addition to building a new bridge over the suzhou river, the roads linking the two sides of the bridge will also be widened. Mr. Gong said that changping's current two-lane route was widened to six lanes. The hengtong road in the east is a broken road, which will connect to guangfu road and the new changping road bridge. It is reported that the whole project west changping road - jiangning road junction, along changping road planning, east across the suzhou river, connect hengtong road, stop at hengfeng road, the total road length is about 853 meters. The contents include: road engineering, bridge engineering, drainage engineering, revetment engineering and related ancillary works.
"We plan to complete the construction of the main bridge across changping road by the end of this year and to complete the construction of the road subsidiary by the end of next year." Gong Liang said, after the open to traffic engineering will improve central city east-west traffic one sex by network structure, improve the passage of motor vehicles across the suzhou river in the area of conditions, land development and urban economic development to promote the surrounding areas. In addition, it can effectively divert the traffic flow during the construction of the north cross channel, and serve the construction of the north cross channel of the city.